This Dandy Gadget: 2010 PMA is taking action now at Anaheim Convention Center, Southern California, USA. In this momentHP is declaring to make a better impact in digital camera and camcorder market. Seriously, they announced five compact digital cameras and three camcorders which is designed in slim, lightweight, unique design and nice looking colors at prices ranging from $99 to $199.

Clearly you can see its unique design in HP’s five point-and-shoot digital cameras: HP SW450, HP CW450, HP PW550z, HP CW450t and HP PW460t. It looks like HP is trying to find out its own characteristic of designs to being your favorite cameras. Hopefully it can shift your old favorite brand and stay along on top with Canon, Sony, Panasonic and others top camera brand companies.

For an amateur photographer, HP CW450 and HP SW450 are the right cameras, comfortable in hands, and easy to operated in 2.7-inch LCD display with 4x optical zoom. It’s enable you to act as well as pro. Indeed, its slim design, easy to pocket, making them are suit on the go purposes. Both of them are similar but HP SW450 camera is using a lithium ion battery, more compact in design.

If you don’t satisfy with both of HP CW450 and HP SW450, HP also unveiled their premium version: HP CW450t and HP PW460t. They are containing a touchscreen LCD display, 2.7-inch touchscreen LCD display for HP CW450t and 3.0-inch touchscreenLCD display for HP PW460t and supported by up to 32GB SD/SDHC memory. A better performance and 25 scene mode available with ease to care, just choose your scene,and they will preview both of your scene and auto mode image in its LCD display. Unluckily, they only have 4x optical zoom.

And for semi-pro, HP PW550z is tailored with a wide-angle lens and 5x optical zoom in 2.7-inch LCD display could be your best choice along others four cameras that HP unveiled. Thanks to lithium ion battery, it has a lightweight design as result.

Meanwhile for three camcorders, they are HP V5061u, HP V5560u, and HP V1020h. The lowest version is HP V1020h which is not designed using a touchscreen LCD display and only featuring 750p HD recording. Others two features a 3.0-inch touchscreen LCD display and featuring 1080p HD recording and motion detection capabilities. For long recording, you are better to choose HP V5061u camcorder, because it is packing with a dual SD/SDHCmemory and an option AA battery for complement power supply when lithium ion battery is over. 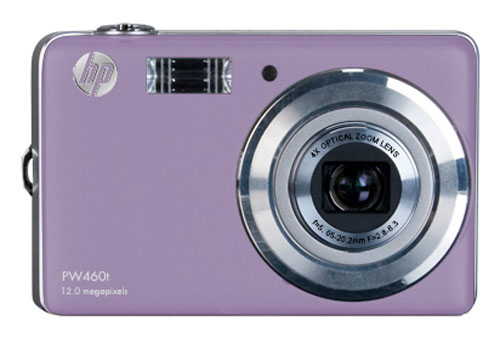 Samsung NX2000 smart mirrorless camera, where is the pink?