I am sure many of you don’t agree with the title. Ok, I accept that disagreement, but this limited edition watercraft, WGP WaveRunner, brings nice color painting like the WGP YZF-R125 Superbike. At least, it is the sexiest watercraft among other Yamaha’s things that flowing on the water, right? 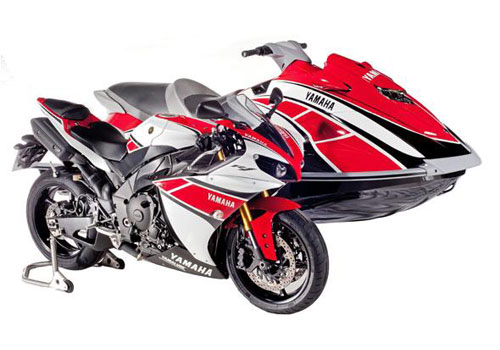 Yamaha said there is no point in going fast if you can’t look good while you are on it. Do you know what I have in my mind: “Although you look good on it, but it can’t go fast, it’s a shit”. Luckily, this watercraft comes with Yamaha’s sublime 1.8 liter marine engine combined and Yamaha’s revolutionary NanoXcel hull technology. Those give the watercraft great power on a light body for going fast on the water.

If you do not believe to what I said, you can ask Tommy Hill, the British World Superbike champion. He knows what called as fast and faster and he also participated on the launch of the WGP WaveRunner at UK, surely he will tell you detailly about this new Yamaha watercraft.

As there is no word from Yamaha about how many 2012 WGP WaveRunner will be on the market, it is a limited edition watercraft, so you need to make quick order. It costs you for MSRP 13,499 GBP at UK. Do you have guts to ride on it? [Dandy Gadget Source]

The Future Innovations in Titanium Tech for Cars